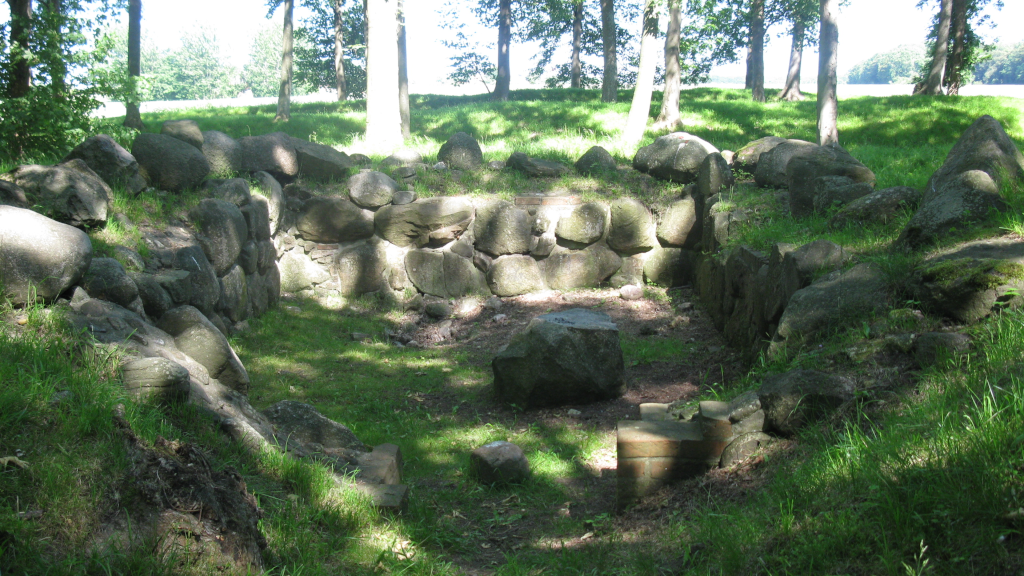 The Mounds of Bjørnkær Castle

In the beautiful nature west of Hou, you find a well-preserved rampart which was a fortress in the Middle Ages. The castle ruin is the best preserved of its kind in the local area and a suitable destination for a walk in the woods.

History in a beautiful setting

Approximately two kilometres west of Hou, near the manor Gersdorffslund, you find the rampart Bjørnkær anonymously located on the outskirts of Vandmose Forest. The rampart is covered by large deciduous trees and, thanks to a great deal of care, the area is idyllic and publicly accessible. The rolling landscape at the small, grassy hills is a beautiful sight that is definitely worth a visit. There are several visible remains of the castle and it is easy to imagine what took place here in the bloody 14th century.

On an excursion in nature

As the names implies, Vandmose Forest is often boggy in wet periods. So, you should consider what footwear to wear if you want to take a walk in the woods.

The trip to Bjørnkær can be combined with a hike in the beautiful forest Ravnskoven which is located one kilometre south of Bjørnkær.

Find Bjørnkær and see routes and nearby attractions nearby on our digital map (Google Maps).

The rampart consists of two banks protected by a double rampart. At the eastern bank, there was a large fortress tower built from granite and monk brick.

Bjørnkær was excavated by the National Museum of Denmark in 1930-1935. In the basement of the tower, a deep well was found that turned out to contain several unique pieces of ceramics that were used to produce schnapps. The invaluable historical treasures that go by the name the Bjørnkær set can be viewed at Odder Museum together with several other historical finds from Bjørnkær.

Do you feel like having more historical experiences near Odder?

In addition to the rampart "Bjørnkjær", Odder Museum has also excavated another medieval rampart, namely the rampart "Kjærsgård", which is located near Hundslund. Read about Kjærsgård and other ancient monuments here.